Eighth Wonder of the World 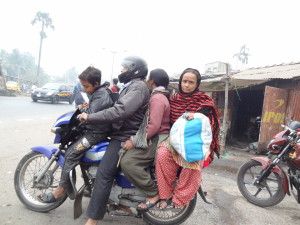 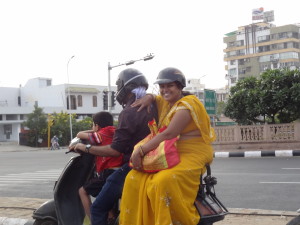 On American highways we have signs that tell us when to stop, to go,to merge, to beware of a curve ahead, and how fast is acceptable. It’s all safely determined ahead of time. Everyone knows the rules and most of us follow them. There are no pedestrians in or near our roads—in fact, walking as a mode of transportation as opposed to pleasure, is generally an antiquated idea.

Everywhere one goes in India, at least in the cities, there is a tsunami of humanity on the roadways. People, cars, trucks, cows, dogs, oxcarts, motorcycles, bicycle rickshaws, tuk tuks (motorcycle taxis), school children and occasionally a camel all share the road. Each has as much of an equal right to the road as the other does or so it seems.

There is a kind of logic to their system of traffic though perhaps the word “system” isn’t the right choice nor is the word “logic”. Finally, as I have overcome my shock and fear and, as yet, havent had an apoplexy, I realize there’s a certain choreography to the whole drama. Drivers in India seem to have more of a sense of the whole. Everything in front of them is theirs to dodge or otherwise not collide with. What goes on behind them is the other guy’s job to figure out. 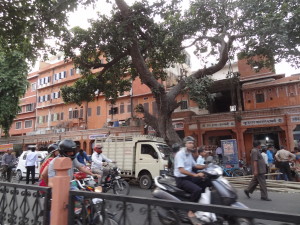 In and out of traffic, darting around trucks three times our size, forty miles an hour when there is enough space to speed and then a precise stop missing the tuk tuk in front of us by an inch. Pass on the right, pass on the left, or squeeze between the cow and the taxi. Pedestrians walk within inches of moving vehicles and step aside for them as if doing a do si do.

A young man on a motorcycle stops next to us. He holds a toddler between his knees. His beautiful wife in a radiantly colored sari sits side saddle and with one hand holds her infant child. “Courage!” It’s the word that stands out in my brain like bold lettering in a BIG font.

As if all this isn’t enough, it’s an orchestra at fortissimo. Trucks grinding, engines burping and groaning. All manner of horns constantly blaring from beeps to elephant wails to deep duck drones. Pollution? Well, that’s another story.

I’ve changed my attitude over the years. I’m not scared any more. It has become quite the entertainment. I feel so much admiration for these drivers . It’s a good profession here in India. They have incredible reflexes and seem to be able to see 180 degrees.

Yesterday was our first day to leave the ashram and explore around Kolkata. Our favorite driver, Prodeep, has eyes that are like melted milk chocolate and full of compassion. He has enough “Hindlish” (English words) to get the message across most of the time and is diligent about repeating until we both understand where we need to go and when. I tell him that he and all the brave Kolkata drivers are reincarnations of the warriors of the Baghavad Gita, India’s great epic poem. He smiles and beams with pride.

In reality, he owns a mid-size Honda and can, for bigger groups, borrow his brother’s SUV.

This entry was posted in Travel in India and tagged Kolkata Traffic. Bookmark the permalink.

2 Responses to Eighth Wonder of the World