The Passing of an Icon

This is a story that first appeared in the Grass Valley Union newspaper. I’d like to share it with my blog friends as well. Amigo Bob Cantisano was a great inspiration to my life and  many others.

He accomplished a great deal to help others that I often feel I haven’t done enough. SOO  I take heart in Mother Theresa’s comment (not exactly quoted).

Not all of us can do great things, but we can do small things with great love. 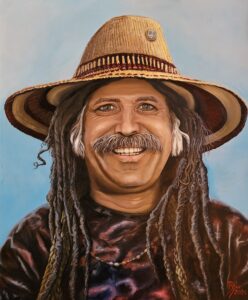 This is a painting of Amigo Bob by local artist and friend, Boni Woodland.

If you ever wanted proof of how the world has progressed and improved in our lifetimes, you only have to look at food.

When I was younger, finding something besides white bread was like a treasure hunt akin to the search for the holy grail. Whole grains, yogurt, honestly extra virgin olive oil, balsamic vinegar, raw nuts and so many other foods we take for granted today were nowhere to be found. Farmer’s Markets with organically grown produce were in their infant stages, and naturally fermented foods were lost to a previous generation of farm wives who cooked from scratch. Organically grown vegetables and fruits were only eaten by hippies, radicals, and chefs who had traveled the world and saw new flavor and health possibilities for the American cuisine/diet.

In the 1970’s changes to our food culture began evolving and expanding in ways no one had dreamed possible. The credit goes to a growing number of organic farmers, visionaries and chefs. One young man, who grew up in San Francisco, was gaining knowledge and experience that would eventually lead him to become one of the most informed and influential players in the Organic Farming/Food Movement.

Just as his ancestors had been pioneers in California, Amigo Bob Cantisano, was determined to make the world a better place. Some people are born with a fire in their belly. He was impassioned and had the focus to manifest his ideas.  We, here in Nevada County, California were lucky to have benefited from one such as this. Amigo Bob distinguished himself by being a powerhouse in the organic horticulture field for nearly half a century. 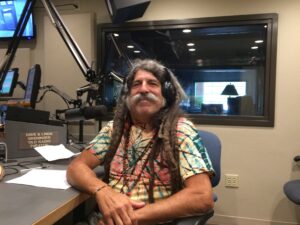 I met him through his radio show on KVMR-FM, called Organic Matters. On the radio he lived out one of his primary life goals—that information should be free and accessible to anyone; not hoarded by the few for their own enrichment. With a wry sense of humor and a rich baritone voice, he answered garden questions every month for more than 25 years. I’ve watched at various events in Northern California where folks surrounded him asking questions about lady bugs, compost or white flies. He always had time for answers.  Amigo Bob taught many of us how to eat and grow our own food without toxic chemicals.

Kalita Todd, his ex-wife, recalled that Amigo was blessed with a photographic memory. In his early years, he parked himself in the UC Davis Agricultural library gleaning information from pre-World War II articles before the mass acceptance and use of chemical additives to our soils began; when conventional agriculture was primarily organic.

She recalled a drive through Truckee in the mid 70’s when Cantisano saw an abandoned store front and made up his mind that it was the perfect place for a Co-op grocery. We the People Food Co-op was born, and many other stores followed in the years to come.

With support from friends and family, Amigo founded Peaceful Valley Farm Supply in Grass Valley, California and the Eco Farm Conference which has been held annually in Monterrey for the past 41 years.  Both of which brought supplies and information to the burgeoning organic farm and food movement.

Perhaps one of the most impactful projects that Cantisano undertook, was Organic Ag Advisors. As the first, self appointed organic agricultural adviser in California, he consulted with more than 600 farmers and 400,000 acres of crops over the last 30 years. Walking into orchards or pristine vineyards of the Napa Valley, his dreadlocks and tie-dyed t-shirts drew many skeptical looks. But when he offered an encyclopedic explanation of what their soil and plants needed, minds changed quickly. And his business grew.

In recent years Cantisano and his wife, Jenifer Bliss, along with Adam Nuber, created a non-profit called Felix Gillet Institute (www.felixgillet.org) dedicated to preserving the legacy of Felix Gillet, a nurseryman in Nevada City in the1860’s who imported and propagated grapes, olives, vegetables and nut trees from all over the world. Though rarely given much credit, he is often considered the father of California agriculture.

For the past nine years Amigo, Jennifer and Adam along with  many volunteers combed the Sierra foothills searching for heirloom fruit and nut trees were planted during and after the Gold Rush. These trees, still surviving in abandoned homesteads and ranches, were propagated to bring back and grow again. Every autumn their catalog of trees for sale sells out quickly and will continue to do so. www.felixgillet.org

Amigo Bob Cantisano passed away on December 26th. This pioneering visionary and friend to many helped to bring safer foods to our plates and launch the next generation of farmers and gardeners. In line with his life’s work, Amigo chose to have his body composted by one of the first companies in Washington state certified to develop compost from human remains.  Perhaps it’s an idea whose time has come.

This entry was posted in Organic farming and Food. Bookmark the permalink.