September, the days are often hot enough for a last swim in the Yuba River when, hopefully, the tourists have gone and serenity returns.    The angle of the sunlight and, of course, the changing trees. Dinners on the deck enjoying an evening with friends. An abundant tomato harvest and the smell of peppers roasting on the grill. Most years I savor those lingering warm days of September like the last spoonful of honey in the bottom of a jar. This year was different.

We were going on our seventh month of the pandemic and, for the most part, the isolation had been a relief simplifying our lives. The loneliness hadn’t, as yet,  gotten me down. Granted, we don’t have jobs and children to worry about.

But the real challenge began Sunday, August 17th three of us were pulling kayaks out of our truck to launch on San Francisco Bay when the loudest lightning strike I have ever experienced clapped overhead. The electrical systems of cars in the parking lot went crazy. Suddenly they were honking and honking. Children were crying! Masked characters stood nearby in a semi state of shock.  Dry lightning without rain is definitely an ominous sign in hot weather. 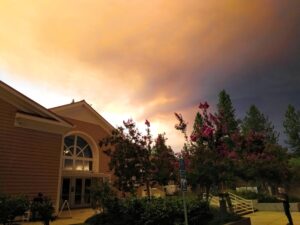 Within the upcoming days/weeks the interaction of four different calamitous climate events all occurred on top of the pandemic. First, the lightning triggered fires in some 300 places. Temperatures soared all over the West climbing to unheard of numbers. On Labor Day, only 104 degrees on our kitchen deck; in Sacramento, it was 112. I don’t ever remember Sacramento ever registering a temperature over 101-103. That evening the winds picked up and cooled everything down. That was a good thing, but it also provided a springboard for sparks to rise up and re-energize. Smoke covered our car, our trees, and drifted in the windows. Pacific Gas and Electric declared an emergency and cut the power to most of Northern California. By 11 PM all was dark.

In the past, our power outages happened in the winter not when the temperatures soared. Downright dangerous to be without a fan, running water or an air conditioner in that heat. I was six days past a knee surgery hoping this was not our time to evacuate. It was as if some Hollywood screenwriter had dreamed up the next blockbuster disaster movie called, Your Uninhabitable Planet. 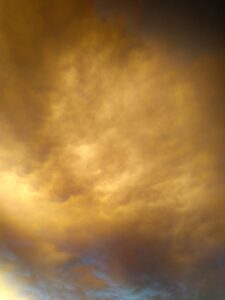 It’s strange to wake up in a house that’s absolutely pitch black. There’s no night light in the bathroom, no blinking yellow modem and printer lights, no fluorescent beam coming from the neighbor’s garage. The silence is otherworldly and a little eerie.

The wind had cleared the air of smoke for the first time in 10 days. Stepping out on the deck, a fingernail moon shared the sky with a plethora of stars. I could breathe–a sigh of relief. Little did we know that the smoke would require us to be indoors for most of that entire month.

Smoke in the air makes me feel like the old floppy Raggedy Ann doll that I had in childhood. With less oxygen I can barely walk straight or remember the sentence while I type it. 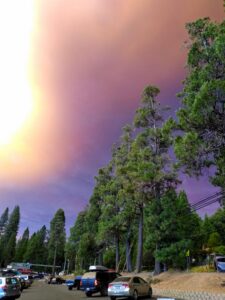 It’s impossible not to recognize that the weather/world has changed when your “go bag” sits ready for an entire month. Climate change is already upon us. It’s not a hoax! It’s not in the future.  I truly understand why people would prefer to pretend that it doesn’t exist.  I suppose we can’t really drink something in, or accept it, until it hits our family or our own experience.

It’s not hard to see how the cost of climate change is quickly becoming life altering; not just for individuals but for governments as well. Some people are paying triple/quadruple for home owner’s insurance. Every day the whirring of chain saws and the sound of trees ka-plunking to earth echoes throughout our forests. People are trimming trees and cutting underbrush around their houses. It can cost as much as 10 to 15,000 dollars. Those that live on the financial edge will, as always, be impacted the most. And no one wants to talk about how breathing smoke for a long period of time will impact our health. It’s  beyond mind boggling.

This past summer I’ve been reading, well, sort of skimming, Walter Isaacson’s book, Benjamin Franklin.  In the book there is a photo of the editing marks on the Declaration of Independence. Thomas Jefferson’s rough draft says, “We hold these truths to be sacred and undeniable that all men are created equal; that they are endowed by their Creator with certain unalienable Rights; that among these are Life, Liberty and the Pursuit of Happiness”  ”. . . .It was Franklin whose back slashing remarks changed them to say, we hold these truths to be “self-evident”. . . .

It seems to me that the right to breathe clean air, to be treated equally like other human beings, and to pursue the happiness of all our citizens is not only self-evident but is also sacred and undeniable. It is one of the most important precepts of our country. People all over the world admire these ideals, and it gives them hope. Yet, we continue to deny/ignore contradictions in our reality.

In the past few months our streets have been filled with demonstrators shouting to be heard, to recognize these contradictions. It’s beyond mind boggling that in the 21st Century we are still enmeshed in racial prejudices based on the color of people’s skin? And if I can’t throw litter on my favorite beach. Why can corporations, which supposedly have the same rights and rules as individuals, continue to send tons of pollutants into our atmosphere, produce products that poison our waters, and contribute to the changes in our climate? Isn’t it the same mindset that creates these contradictions?

PS  These photos are of a fire that was about 70 miles away, but two were happening simultaneously and drove the smoke over Grass Valley and Nevada City.

This entry was posted in Uncategorized and tagged September Fires. Bookmark the permalink.

2 Responses to September Was Cancelled