Heirloom Treasures for the Orchard and Beyond

This is a piece I wrote for the Grass Valley Union newspaper. It is such a unique concept and an important agricultural opportunity that I wanted to share it here in the blog also. These folks deserve our support.    Patti Bess 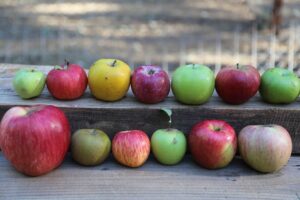 Ever heard of Felix Gillet? If you value California agriculture, you might want to know him. If you drink wine, you are indebted to Mr. Gillet as he cataloged over 240 varieties of grapes.

In 1866 Gillet, a French immigrant, opened his Barren Hill Nursery to the public on 16 acres of logged property on a beautiful hilltop in Nevada City, California. During Gillet’s lifetime, he imported and bred thousands of varieties of old world fruits, nuts, and ornamental plants from as many as 35 countries. Much of California’s success in perennial crop agriculture can be traced back to this Nevada City nurseryman. He could be called the father of California agriculture, yet rarely does he get any credit. He also contributed to various scientific journals.

In 2003 Amigo Bob Cantisano and his partners, Jennifer Bliss and Adam Nuber, created a nonprofit corporation called the Felix Gillet Institute (www.felixgillet.org) dedicated to preserving the legacy of Gillet by identifying, propagating, and preserving edible and ornamental heirloom perennials that were planted in the Sierra foothills during and after the Gold Rush days. The three partners have become sleuths exploring abandoned gold mining towns and old homesteads as far as Graniteville, Columbia, Humbug and beyond. They search for the old varieties of fruit and nut trees that still survive today.

They take scions from the grandmother trees and graft them onto rootstock, plant and care for them for a couple of years; then sell them in a catalog under the auspices of the Felix Gillet Institute (FGI). Currently, they have two mother orchards in Nevada and Sonoma Counties where the trees are grown and are looking for new orchard land. 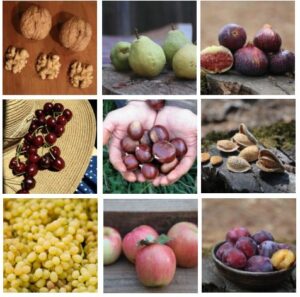 Preserving the trees of our forbearers has a certain romanticism to it, but also very practical applications. If, as projected by most scientists and demonstrated by our recent weather challenges, we continue to have harsher conditions in the future, these hardier trees may indeed be better suited to survive and thrive. They have been growing in abandoned homesteads and mining camps for more than a hundred years without pruning, watering, or fertilizing. Many are still producing under those conditions.

When visiting their farm last fall, Jenifer Bliss took me to the back of the house to a walk-in refrigerator. Stepping inside, my senses were overwhelmed by the scent of fresh picked apples. Something we never experience in our supermarkets. Reine de Reinette is one of her favorite apples. It originated in France and the name means Queen of the Pippins. An old farm guide from the 1800s describes the variety called  Autumn Strawberry as a “yellow and pink apple with a hint of strawberry and tender flesh, the best dessert apple.”  This year the Felix Gillet catalog will feature apples, pears, cherries, figs, almonds, walnuts, and many others.

“If we can figure out how to take the characteristics of these old varieties and meld them into modern agriculture, we’re going to have a more sustainable food source in the future,” Cantisano commented.

Amigo Bob Cantisano, the founder of the Felix Gillet Institute, is an agricultural heirloom himself. Self-educated, he is a walking, talking organic gardening encyclopedia and a man with a mission. Through his consulting company, Organic Ag Advisors, he has worked with more than 600 farmers and 400,000 acres of crops over the last 30 years. He has helped them to transition to organic growing techniques and to bring safer foods to our plates.  Most folks know Amigo Bob as the host of a monthly radio show, Organic Matters on KVMR-FM, where he answers the many questions from frustrated (and successful) gardeners/farmers. He is the owner of Heaven and Earth Farm and a co-founder of the Eco Farm Conference in Monterrey County, to name just a few of his accomplishments.

Think this all sounds pretty far out? Last three years Felix Gillet catalog sold out of trees. (Reminder, the early bird gets the proverbial worm or tree as it may be.) Buyers are generally Sierra foothills gardeners and small farmers who want to preserve a bit of our past and willing to experiment with them, but the last couple of years more commercial farmers ordered trees. If a new heirloom variety takes hold with consumers, it can bring higher profits for a farmer.

All of these plants will grow well in any region that gets an average of 500 chill hours each winter, which is most of northern and central California, Oregon and Nevada. They would not grow well near the bay or Pacific Ocean.

If you would like to receive the upcoming online catalog, send an email to thefgi@gmail.com. Catalog will be live online by mid-October. You can also find the institute on Facebook or the website, www.felixgillet.org      Office phone: 530 292-3619.

4 Responses to Heirloom Treasures for the Orchard and Beyond