And we’ve got to get ourselves

Back to the garden. 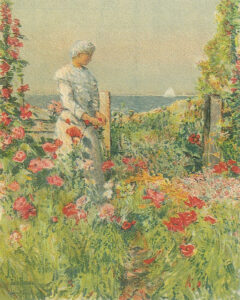 And Covid-19 sent many Americans back to their gardens.  In April grocery shelves were empty and people had time on their hands. If this virus was going to be around for a while, folks all over the country decided to plant gardens and spend more time cooking and being with family. Last spring, here in the Sierra foothills and throughout the country, it was impossible to find seeds for any vegetable or flowers. The sale of tomato starts increased by more than 300%. Nurseries were seeing profits they hadn’t experienced in years. There’s always a silver lining in everything.

There hasn’t been this much interest in gardening since World War II. Back in 1917, the U.S. government called on Americans to grow “war gardens” to free up food for soldiers fighting overseas in World War I as well as feeding their families.  By the 1940s, “Victory Gardens” became ubiquitous in every city, every neighborhood. Today, maybe we’re planting gardens to win the war on the pandemic, but more to keep ourselves mentally sane.

Recently I was looking through bookshelves and ran across one of my favorite books. It was given to me by a friend, but I can’t remember who. If it was you, thank you so much.

An Island Garden by Celia Thaxter, published in 1893, was one of the first garden books that weren’t just plant lists and instructional how-tos. It was truly literary. Her descriptions and obvious love of flowers were lyrical, poetic. Thaxter wrote that she often got up at “bird peep” (dawn) to transplant her precious seedlings. Her explanations of what had to be done to save them from the slugs, snails, thrips, and caterpillars are so detailed it’s almost tiring to read.

Thaxter grew up on Appledore, an island off of New Hampshire. Her father was the lighthouse keeper and later her family bought and ran a hotel on the island. Growing up a very lonely child, she became enamored with and dedicated to the flowers and plants that grew on the island. They became her friends/her lifeline. Though some of her writing is somewhat anthropomorphic, still I have never read anything with more sensitivity and appreciation of the beauty of nature. 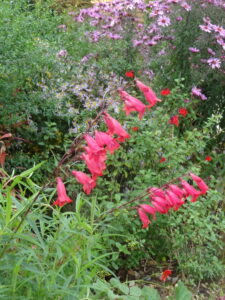 In her adult years, Thaxter continued to spend summers on the island. Her garden and family’s resort became a destination for the meeting of minds—poets, painters, and thinkers gathered there. Childe Hassam, America’s premier Impressionist painter at the time, spent many summers himself and painted the illustrations for her book. (picture above)

This is the opening paragraph of An Island Garden.

“Of all the wonderful things in the wonderful universe, nothing seems to me more surprising than the planting of a seed in the blank earth and the result thereof. Take a Poppy seed, for instance: it lies in your palm, the merest atom of matter, hardly visible, a speck, a pin’s point of bulk, but within it is imprisoned a spirit of beauty ineffable, which will break its bonds and emerge from the dark ground and blossom in a splendor so dazzling as to baffle all powers of description.”

The family’s hotel and the gardens were destroyed by fire in 1914, but today you can tour Thaxter’s garden if you can get to the East Coast. It was reconstructed by and is still maintained by the Shoals Marine Laboratory, an education center for Sustainable Stewardship in New Hampshire. They offer tours from June through September.

Having some kind of art or creative endeavor is essential to thrive in these difficult times. For me, gardening does that on so many levels—physical exercise, peace of mind, and a deep connection to nature. 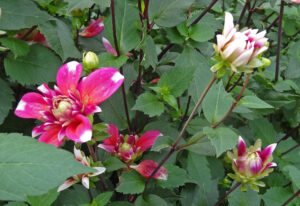 Every spring I become smitten, motivated, literally driven to bring to life an even more beautiful and abundant garden than the year before though my body is not as young as it used to be. The roses in May were stupendous, the hydrangeas luminous, and the tomatoes juicy. This year’s zucchinis are not, as yet, happy with their location.

But today, the heat of August is pulling me down, I am overwhelmed begging the landscaper to add us to his schedule. At times the garden battles feel as if they will swell up from behind, and I’ll drown in dirt –moles, those mess-making skunks, hornworms on the tomatoes; and weeding, weeding, weeding.

A new neighbor, not far below our house, has been thinning trees for two weeks. We, here in Nevada County, have all been cutting trees near houses to prepare for fire season. But the constant roar of heavy equipment and the REHHRR REHHR  REHHRR of chain saws grates on me. The sound of ancient pines thudding to the earth shakes not only our house but jars my mental state and makes me feel so sad – not unrelated to the disappointments and isolation of Covid-19 finally taking their toll.

These are small problems compared to the rest of the world. Tomorrow will be different, and so the drama of this life plays out.  We have our highs; we have our lows. I hope you can ride out yours as I must ride out mine.