The President is Coming!

Some people might walk into a baseball stadium and feel completely at home. I drive up to the big white gate of the Yogoda Satsanga Society ashram just outside of Kolkata, India; and it feels as familiar as my kitchen. 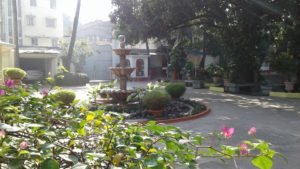 Dakshineswar ashram is five acres of overhanging trees and gardens that face the Ganges River. There are basically four buildings; an office that also includes a temple, a dormitory for retreatants, the kitchen/dining building and housing for the monks which is off limits to visitors.

The temple faces the river. Across the front is a large portico with marble tiles that remind me of a grand porch across an old Southern mansion. The pillars start out as classic Greek columns and then explode into ornate Indian carvings at the top. Birds that make a “whoopa whoopa” sound and crows dart from tree to tree. You can occasionally hear faint sound of voices on the ferry putt putting across the river. The temple has vibrations that I could never find words to express. 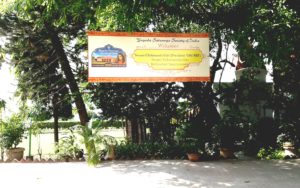 What a pleasant surprise! We arrived at the Dakshineswar ashram just days before Brother Chidananda’s visit. Nice coincidence?  He is the new president of Yogoda Satsanga Society of India and the American counterpart, Self Realization Fellowship. Both of the recent presidents have been quite aged so neither had visited India in a very long time. Elected only last August after the passing of Sri Sri Mirnalini Mata, Chidananda  knew immediately that his first duty was to go to India for their 100th anniversary.

The days before his visit we all felt swept up in the excitement.  Ashram employees and volunteers were painting, cleaning, scrubbing, and arranging. Even my favorite security guard with the balloon cheeks beamed with happiness as he went about his extra chores. My friend, the kitchen manager, thought since it was a weekday, perhaps only 200 extra visitors would come, but the next morning they were planning for 500. The streets in Dakshineswar are one lane rat mazes–hard to imagine people finding parking or even a way to get there. There are folks here from all over the world—a German group, two Swedish girls, New Zealanders, and a larger group from Argentina.

Within hours a stage was erected in the gardens, a sitting area set up for serving dinner, audio system tested and re-tested, and chairs carefully lined up. Flowers and banners everywhere possible.

Finally after much Indian ceremonial officiousness, Brother Chidananda took the microphone carrying us away on his commitment to a vision for the future, his humility and love of the guru. During his speech, my mind wandered to the political drama unfolding in America, and I barely could believe my good fortune to be here instead of there. It felt like a dream.

There are many pseudo spiritual teachers, especially in California, but when a person has gone through the training of going within until he/she conquers their own darkness of the mind, there is a magnetism that’s difficult to talk about but is as real as the mosquito bites on my arm.

One feels filled with, what to call it, sweetness, love. These are only words that can barely describe my overflowing heart. He gave prosad (a small gift) individually to every person present, holding our hands for a few seconds.  Being in his presence continues to motivate David and I to work harder.

This entry was posted in India, Kolkata and tagged Dakshineswar Ashram. Bookmark the permalink.

2 Responses to The President is Coming!