Oh Susannah! Won’t You Cook For Me?

Oh Susannah! Won’t You Cook for Me?

My husband, David, and I are the guests at the home/guesthouse of Mrs. Bhola Singh. She is about 75 years old– a remarkable woman– independent and deeply devotional– a long time member of the Yogoda Satsanga Society here in Ranchi.  Under the direction of Indira Gandhi in the late 50’s, she brought a group of young Indian dancers to the United States on a cultural exchange. “In those days we had to prove to the world that not everyone in India was a snake charmer,” she told me.

Her husband passed away ten years ago, and her loyal servants have been with her for 25 years. As a Westerner traveling in India, the concept of servants is difficult for me to accept though it is not my place, as a guest, to judge.

Susannah cooks and her husband, Kailash, manages the house and gardens. They live in a small cabin on this beautiful estate, eat well, and Mrs. Singh also pays for their teenage son’s education. The growing prosperity in India rarely reaches the lower classes. For most, life is harsh beyond our imaginations—in comparison Susannah and Kailash live well. 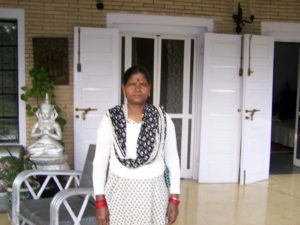 I sometimes walk into the spacious kitchen singing, “Oh Susannah, won’t you cook for me? For I’ve come from California with a hunger for to eat.”

Susannah explodes in embarrassed giggling. I sense that my friendliness crosses a few subtly drawn social lines, but we  have fun together. (despite her serious attitude when it comes to taking a photo) Our attempts to understand each other begin and end with a great many “Thank yous!” One of the few words she knows in English and the only one I know in Hindi. I can’t say that we converse, but we definitely communicate.

One evening I didn’t eat all the food she gave me. Her gestures asked why not, so I blew out my cheeks and walked like an elephant trying to show her how fat I’d become if I did. She laughed and laughed, but soon she walked to the table and asked sweetly, “Not good?” I reassured her with more pantomiming about how delicious the food was.

I love this woman. Susanah teaches me more than just cooking. She sings quietly while she works and always smiles.  She’s humble and does her work even when her employer or the guests are impatient, grouchy or just getting older and harder to please. She understands the concept of surrender/of the joy of serving others more than this independent, don’t tell me what to do American woman ever will.

For 50 years, advertising in the West encouraged women to get out of the kitchen as fast as possible. Sometimes we see cooking as drudge work to avoid.  Today in India, marketing is geared to the growing affluent generation of modern Indian women. It sounds exactly the same as what we and our mothers, in the 1950’s, were indoctrinated with. “Serve this pre-made soup in a box. It will make your children smarter and you will be a happy mother.”  And the trend begins again. More profitable, packaged, processed foods for India.

Susannah’s love and attention are physical ingredients in the food she prepares. That’s one of the things I admire about her. Serving others is her duty. She accepts that, and it actually makes her happy! What could be more important to do in life than to feed the ones we love?

Dal is a standard dish in many regions of northern India usually served with rice, curries, and other vegetable dishes. It’s sort of the fried chicken of India. Every family/region prepares it differently.

Susannah’s explanation to me for making dal went something like this.

“Kshish!  RRRR!!  Kshish RRRR!”  Four fingers shoot up in the air meaning the pressure cooker lets off steam and makes this sound four times before the dal is cooked.

With knife in hand and pointing to the onions, garlic, and ginger; she says in English, “Cut, cut, cut, cut!” Circling the spoon in the air over the fry pan means sautéing them in the butter or ghee.

I don’t have a pressure cooker so here is my Americanized version of how to make this delicious staple. Serve it with rice and raita which is a dish of yogurt with grated cucumbers and a dash of cumin and cayenne. In India dal is prepared in larger quantities to be used for several days, but this recipe is a smaller one for a first try. Enjoy!

One and half cups yellow split peas *

One half teaspoon curry powder*

Juice of half a lemon

Add the rinsed split peas to the boiling water or stock. Cover and turn heat to simmer, about 30 minutes. Cook until tender but not so long that they lose their shape. They should have the texture of mashed potatoes.

Heat oil in a medium size pan with a good lid. Add mustard seed to hot oil and cover. Allow to brown but not  burn—just a couple minutes on a low flame. Open the lid very carefully as the seeds tend to jump like popcorn. Stir in turmeric, curry powder and garlic. Sauté until garlic is softened and then add the peas along with the lemon juice. Makes about 6 servings.

*All of these ingredients can be purchased in bulk (in smaller quantities) at a natural foods store.

This entry was posted in Uncategorized and tagged Making Dal. Bookmark the permalink.