In India I found a race of mortals living on the earth, but not adhering to it. Inhabiting cities but not being fixed to them. Possessing everything but possessed by nothing.

Yesterday in meditation I could hear the Brahmachari laughing upstairs in the hallway so I walked up there. I’ve seen him over the years in Dakshinesar ashram. He has a deep baritone voice, but when he sings it is so sincere and pure. He was talking with a couple of families who were visiting — delightful to see their older children bowing and idolizing this man of God instead of some football hero or a rock star. He isn’t, however, a “book learned” religious man. He exudes something which the word love doesn’t quite describe. Standing near him, it felt sort of like that moment when they lay your first child in your arms and new circuits light up your “mother channel” deep within your being.

David and I strolled in the garden on one of our first days. The cook, who I hadn’t even met yet, called out that she had a gift for me– an extra dress (kurta) I might like to have. Now, the reason this was so incredible was that I had just discovered in the morning that the special dress I bought to wear in the ashrams was still hanging in some closet in France

(or hopefully the cleaning woman is currently enjoying it). We walked further and met another new friend, Rajif, my adopted son. He arranged that David and I meet with two local people who own a travel agency.

In the past in India we often flew by the seat of our pants– planning a few days a head and deciding where we wanted to go. Not now. It has become so much more Westernized that booking ahead is a necessity.

We met our angels, Anurag and Shaifalli, in the library of the ashram. They are partners in a company called Travel Mate here in Delhi. Both are devotees and had lived the corporate life and were miserable. Six years ago they became partners and formed a travel company. In two hours of chatting, they planned the best prices and connections on plane and train tickets for our whole five weeks– all on Shaifalli’s computer– her fingers tap danced on the computer keys. Can you imagine anyone in the U.S. sitting down with you for a free three hour business consultation? (Well, except for you, MaryHelen) At the end of our scheduling session, David mentioned that I loved to eat and wrote a little bit about food. They twittered away in Hindi and then he asked if we join them to sample one of Anurag’s favorite delis in Delhi.

The place looked ordinary like most bakery/delis UNTIL. . . The first dish to arrive was called Pani Poori The plate held four bowls of sauce and a tray of what looked like small bird’s eggs with a center filled with a bit of vegetable and potato. You spooned ea sauce into the opening and popped it in your mouth. textures flavors alive in your mouth at once. They did a little dance on your tongue. Next dish was called Aalu Tikki it was a bowl of yogurt or here it is called paneer. Floating in it deep fried crispy potatos chunks. Slightly sweet strips of red veg over top. A green and golden sauce swirled through Mysterious mix – not really sweet, almost hot, definitely tangy, and great textures. The smell was so enticing.

David and I see so many good changes in India. More abundant water, more hot water Yea! A garbage system that’s making a dent (in some cities). Fly overs (aka overpasses) So many young people in the local mall carrying many shopping bags. But Anurag says that only 10% of the people lives are improving. The villages haven’t changed much.

Just couldn’t find our place for a the first few days here. We’ve been so spoiled being around such loving thoughtful people in the ashrams and finally we are on our own. And I was ready for a real bathtub and pretty sheets—just not 30 any more. Now we are in a clean, sweet place with a great rooftop where we can see the Ganges. there is such a smorgasboard of yoga and spirituality here. All david and I want to do is sit on our roof and watch the world go by. I woke this morning at 5:30 AM with sound of a pony clip clopping on the cobblestone street below bringing rocks down to the main road. Sun breaks over the mountain and the Ganges almost glitters in the morning light. By 6:30 trucks and tuk tuks (motorcycle taxis) are revving their engines and the monkeys are squabbling. 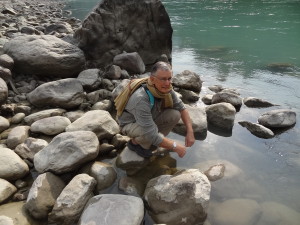 David at the Ganges

Yesterday David  and I took a taxi to Vashistha guhu (guhu means cave). Mr. Toad’s Ride is nothin’ compared to these taxi drivers on mountain roads (but don’t worry about us). The cave went back into the cliff side, and we sat in there for an hour and walked along the Ganges before all the tour buses arrived. I don’t remember the saint’s name, but he lived there until his mahasamadhi. In India they celebrate not only birthdays but the day they leave the earth, called mahasamadhi. If we had more time, I’d go back there and stay in a guest house far from the commotion of Rishikesh.

Have another new friend in this guest house. Can’t remember her name so we call her Lichtenstein which is where she is from. Anyone know where that is?

This entry was posted in India and tagged Lichtenstein, meditation, Rishikesh. Bookmark the permalink.

1 Response to Noida to Rishikesh