Knowing I’m going to spend the night on a train fills me with anticipation. There is a certain intimacy of sharing a cabin with other passengers, and in India, usually great conversations.

We stand on the platform waiting. There is the hustle and bustle of arriving and then people find their spot, turn their suitcases up and sit—waiting for the train. The tea wallah calls out, “CHai! Chai!” in his nasally voice. The first time I came to India I thought he was calling out,“Joy, Joy, Joy” (Chai is general term for tea in India but usually means masala chai with milk)

There are always beggars at the train station that, like a heart surgeon, crack open your chest and re-adjust the heart strings. The station is filled with colorful blankets and families sleeping on the floor everywhere.

The train arrives and a mad rush to climb on board begins. Indian people are patient and polite except in crowds when they push their advantage as much as possible. 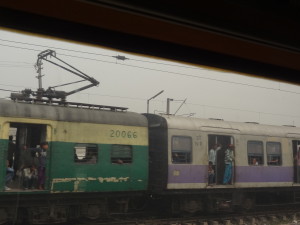 Once we are settled and in our compartment the train finally burps and lurches forward. Moving, slowly out of the station—then the clackety clackety clackety of building up speed. It begins like a horse in a gentle walk, then the riotous movement of a trot and finally, at full speed, it settles into a good gallop. I sink into my dark cubby hole of a top bunk allowing “train yoga” to do its work as it jostles my body like jello.

I am almost dropping off to sleep when the rumbling is interrupted by another train passing in the dark night. Its horn blasts an eery sound, a certain loneliness that only trains in India have– even more mournful as it fades in the distance. There’s something mysterious about hordes of humanity rushing to where I have just come from. I wonder, are they journeys of hope, of survival, a pilgrimage? Most people in India are not traveling for pleasure.

This is a first class air conditioned compartment, A certain guilt comes over me as I know the difficulty of sitting in the third class section, families squeezed onto benches with so many others, trying to sleep a little through the night, but David and I are too old to ever do that again.

The air conditioner in our compartment is what we call in the states a noisy ceiling fan. It spews out burnt smelling air, but still it cools a bit and provides additional background music to sleep by. The porter brings a packet of clean sheets, and I pull a wool shawl over my head. It’s sheepy barnyard smell is comforting. I turn, toss. Havent seen any lions in India as yet, but can hear their roar/snores in a cabin nearby..

Wide awake! Listening to the creakings and squeakings of a train that is probably older than the one my grandfather rode as a caboose man. Mind travels to those long ago memories—my grandmother and I sat in her 57 Chevy in the Rock Island train yard in Illinois, waiting. Finally my grandfather appears, his bald head shining in the late afternoon light. He limps over the tracks toward us, his old war injury always a source for another story or one I’ve heard many times before. I run across the tracks to meet him and wave goodbye to his old cronies who always remember my name.

The memories drop me into that snoozing dreamlike state and finally to sleep. In the morning Delhi.

In the dawn light I can see rice paddies like patchwork squares and sugarcane fields far into the distance. Along the tracks are neatly laid out cow patties placed in the sun to dry, later to become fire for the home next to piles of burning trash. Occasionally the smell of sewage comes thru the air. Red plumed pampas grass lines the tracks and women in fluorescent colored sarees walk with water bottles in their hands or on their heads.Train crossings oxcarts and Tata trucks line up. Bicycle rickshaws taking children in fresh uniforms to school, and hundreds of young men on motorcycles all waiting for the train to pass. Another day in India.

This entry was posted in Uncategorized and tagged India, Jaipur. Bookmark the permalink.